Morocco is located in north west Africa and has a population of around 34 million and an area of 446,550 km2 or 172,410 sq. miles. The country has a constitutional monarchy with elected parliament. It's capital is Rabat, and one of it's biggest cities and the most famous one is Casablanca. The country is consisted of Arabs, and indigenous Berbers. The official languages are Arabic, and Berber. French is widely spoken.

Now that we know a little about the country, let's talk about rugs! 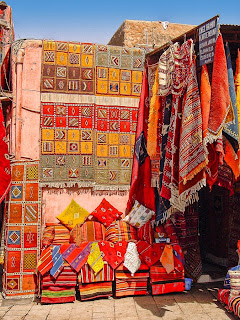 Moroccan rugs are simply beautiful, popular, and desirable objects of tribal art and unlike many other rugs of different origins, they cannot be programmed. This is due to the culture of the weavers, nature of their life, geographic locations, lack of central workshops/factories, and many other variables.  And this adds to their uniqueness and exclusivity.

The design of Moroccan rugs are simple, modern, primitive, geometric, abstract, and in short, they are like kids paintings. In Morocco, these rugs are made by Berber tribesmen and women, Berbers are scattered in several  north African countries such as Algeria, Tunisia, Libya, and Morocco. However, there are many sub-tribes in the Berber tribes among which Beni Ourain is a famous one for making open field deep/thick pile, shaggy rugs with brown, black and white diamond patterned soft wool knotted rugs.

Berber Moroccan rugs are usually made on cotton foundation with local Atlas Mountains lamb's wool pile. In rare and old pieces, we may see some camel hair. The wool is sheared and combed before it is spun. Both natural and synthetic dyes are used to prepare the yarn for weaving. Neonic yellow, orange, pink, purple and other vibrant and strong colors are mostly synthetics. Un-dyed natural yarn of cream, Ivory, brown, and black are also widely used. We see these in Beni Ourain deep pile shag rugs. 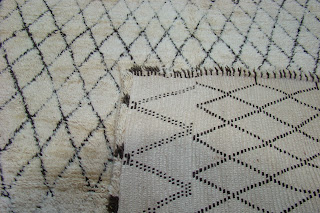 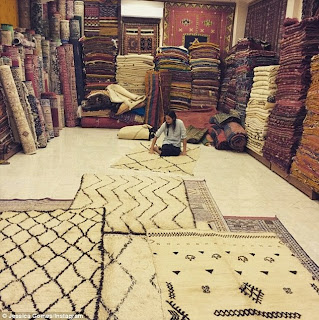 More in the past and to some extent even today, Moroccan rugs have had utilitarian and domestic usage for bedding (as mattresses), blankets, protection against cold and insulation in the Atlas Mountains. The smaller sizes could be used as prayer mats.

There are many imitations of Moroccan rugs in the market, however, the feel, and handle is not the same. It is like the feel and handle of authentic Hereke silk carpets compared with the fake Chinese copies.

Some Berber weavers are superstitious and weave abstract symbols and motifs into the rugs to protect the rugs and their lives from evil and bad eyes and spirits. Some of these designs can be seen in rock and cave paintings. 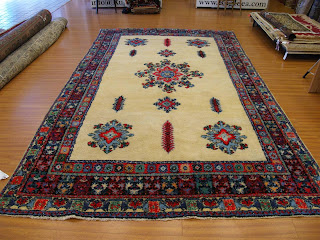 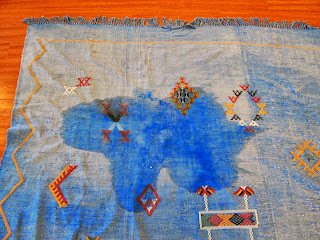 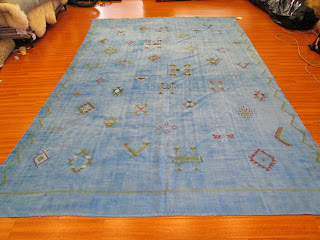 We receive many Moroccan rugs for cleaning. Some are brand new, but have bad smell and odor. Many of the kilims and flat weaves we receive for cleaning bleed and this is due to their wefts and their fugitive dyes. And we know how to test and take care of these. 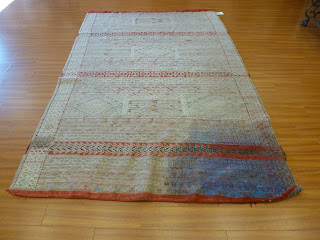 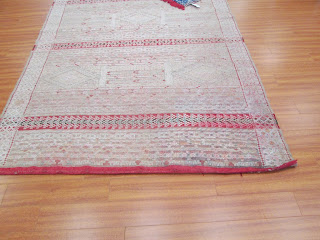 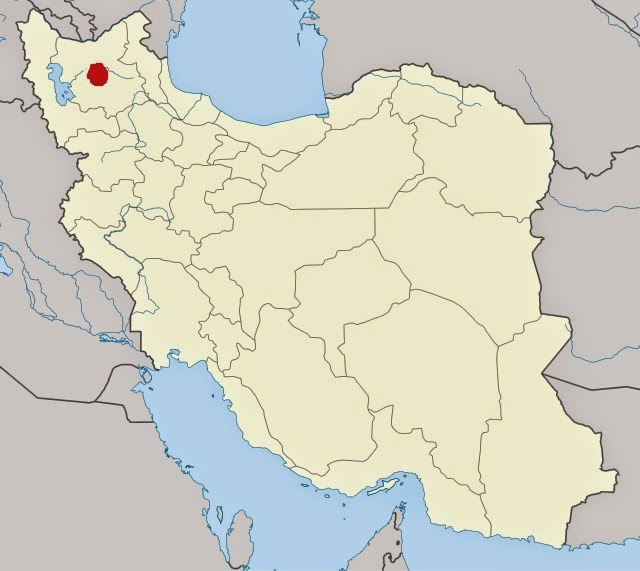 Tabriz, has been one of the historical capitals of Iran with a turbulent history with its oldest civilization sites which dates back to 1500 B.C. This ancient city is the capital of East Azarbaijan province in north west Iran. Tabriz has been and is the land gateway of Iran to Europe.

Tabriz rug usually have high quality of wool, weave and craftsmanship. One of our good clients has two Persian Tabriz rugs she wants to sell. Both these Tabriz carpets have been hand washed by us recently and look and feel beautiful and fresh. By clicking on each picture, it will open in a new big window. 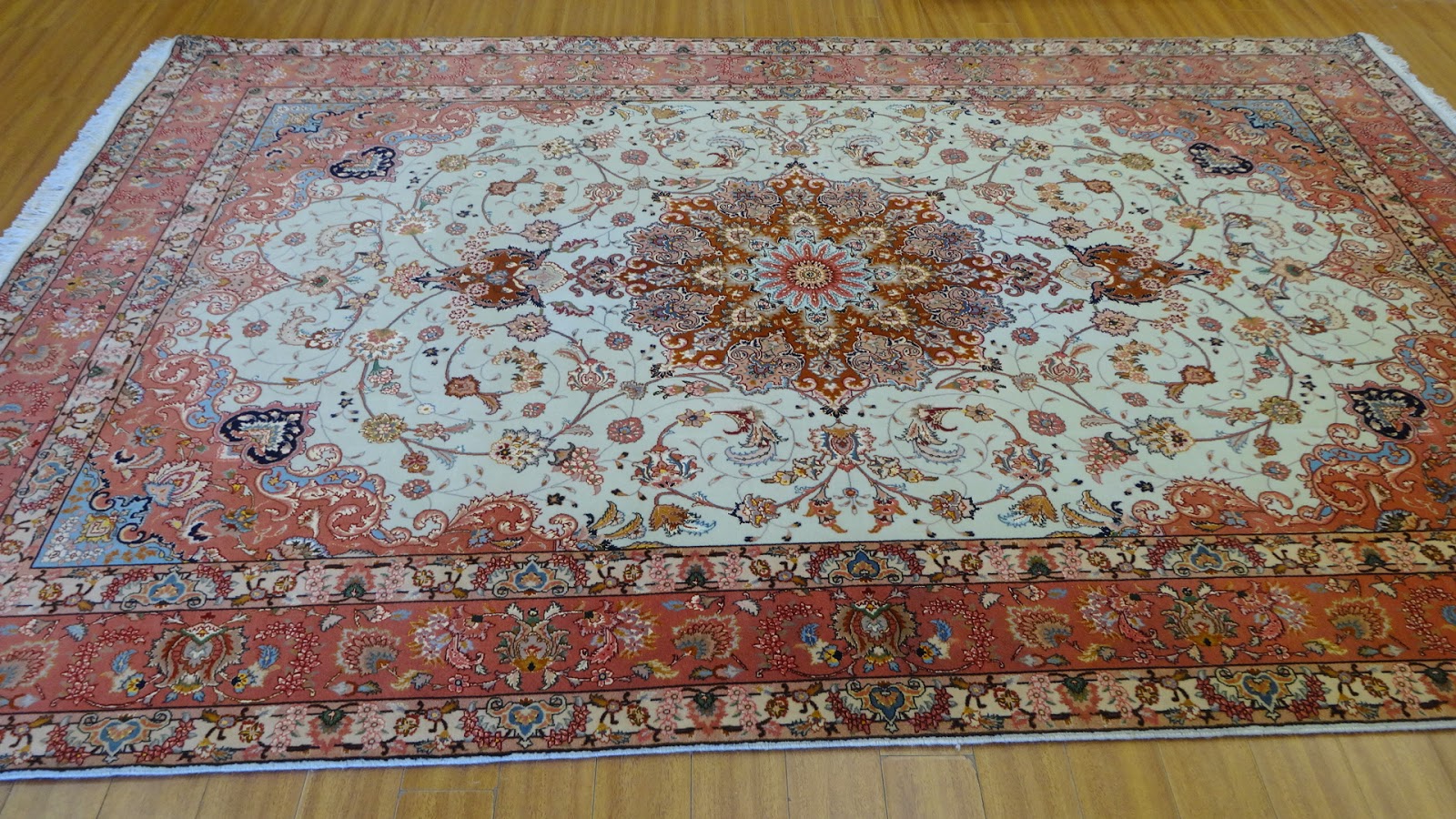 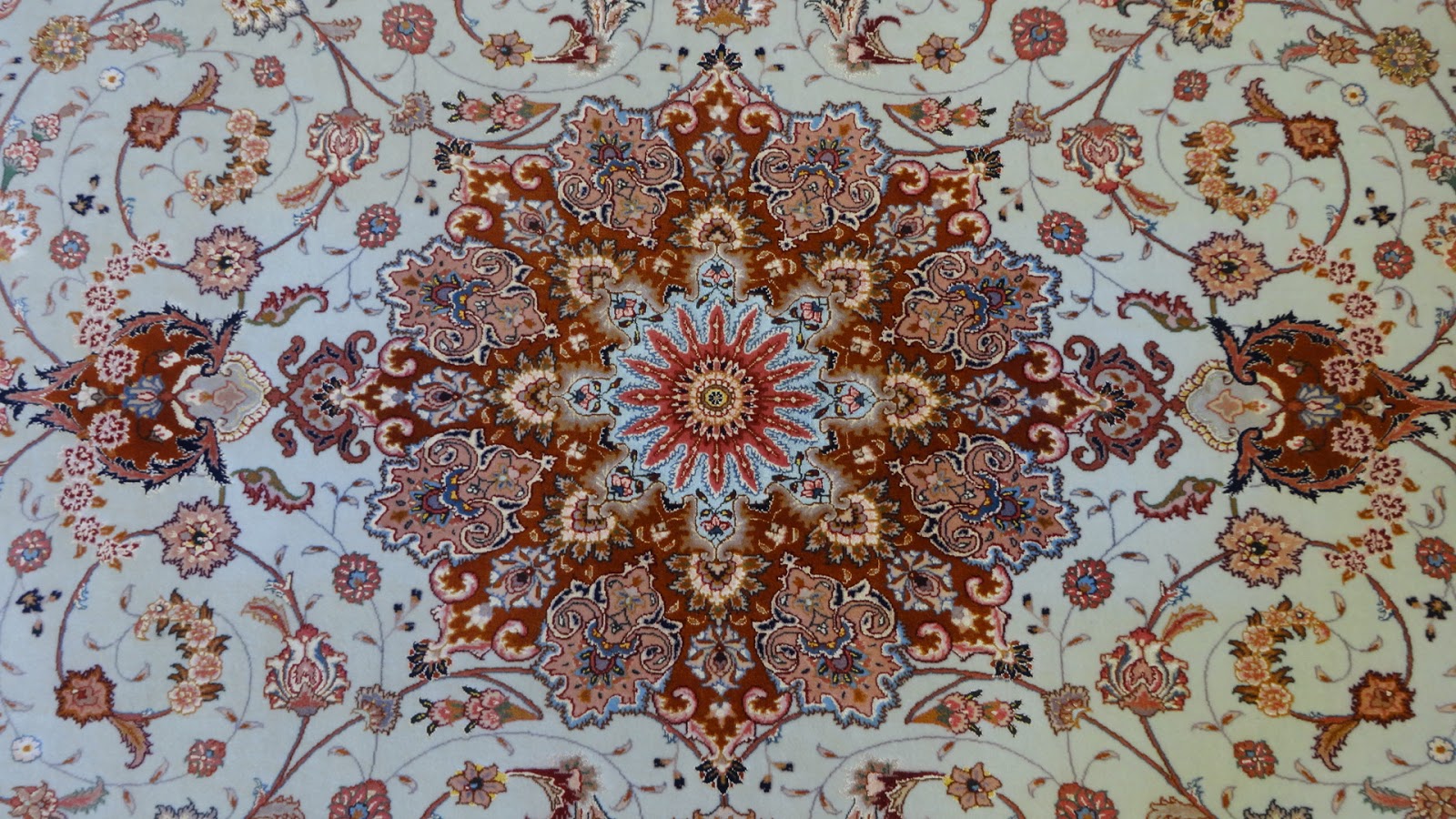 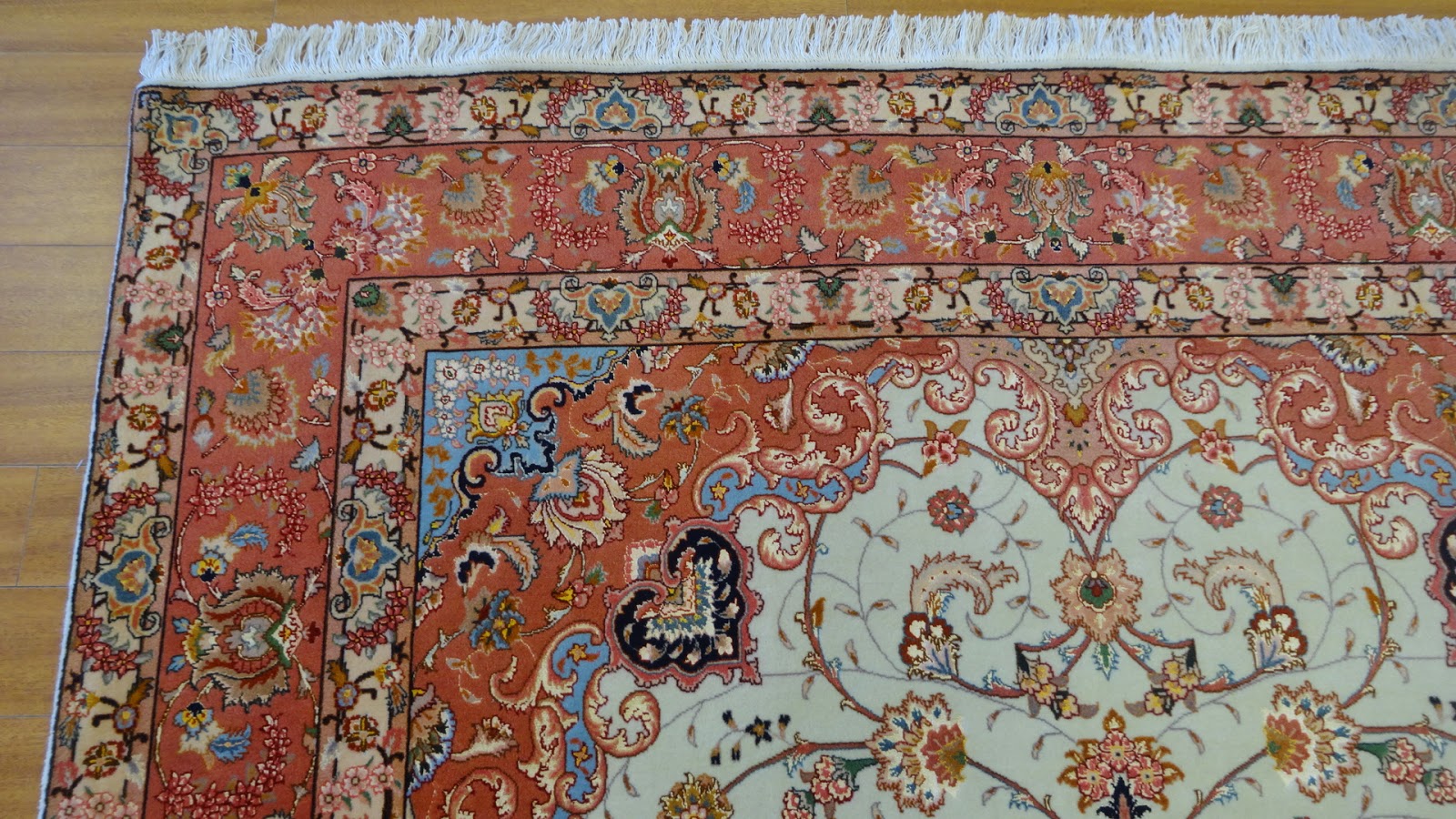 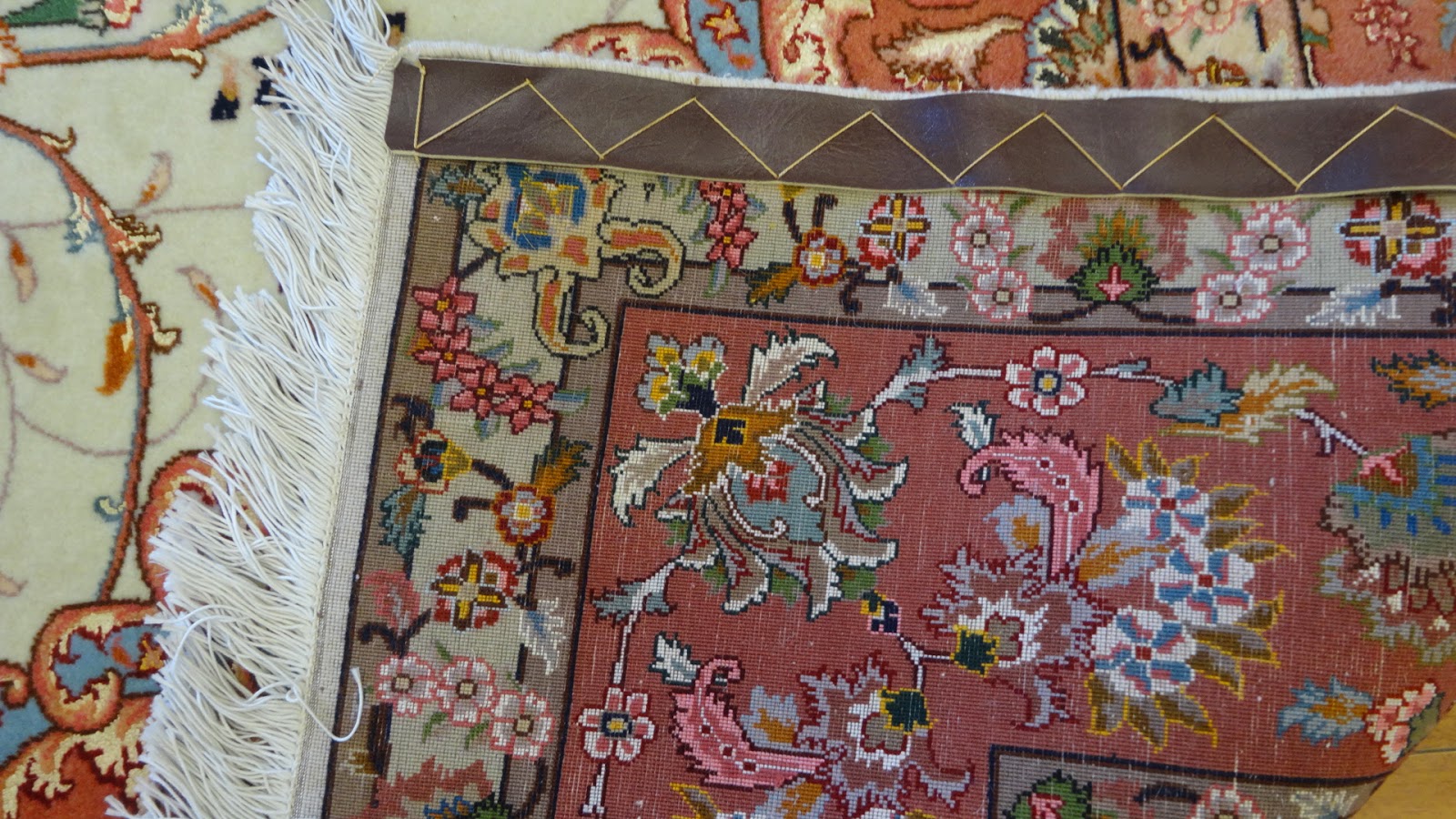 The size of this Tabriz rug is 6' 6" x 9' 8" with cotton foundation, and baby lamb's wool pile and pure natural silk. Because of the high quality and our recent deep cleaning, all the silk accents and flowers are highlighted and look shiny and soft. The design has four corners with a beautiful medallion in the center. This is a real art work which adds warmth and character to the room in which is used. The knots density of this rug is high and is around 300 per square inch. This type of rug is also investment and its price appreciate by the passage of time. Her asking price for this piece is $6,300. To make it easier for out of Los Angeles buyers, the shipping cost by UPS ground to all 48 states in the U.S. continent (except Alaska, and Hawaii) will be paid by the seller. 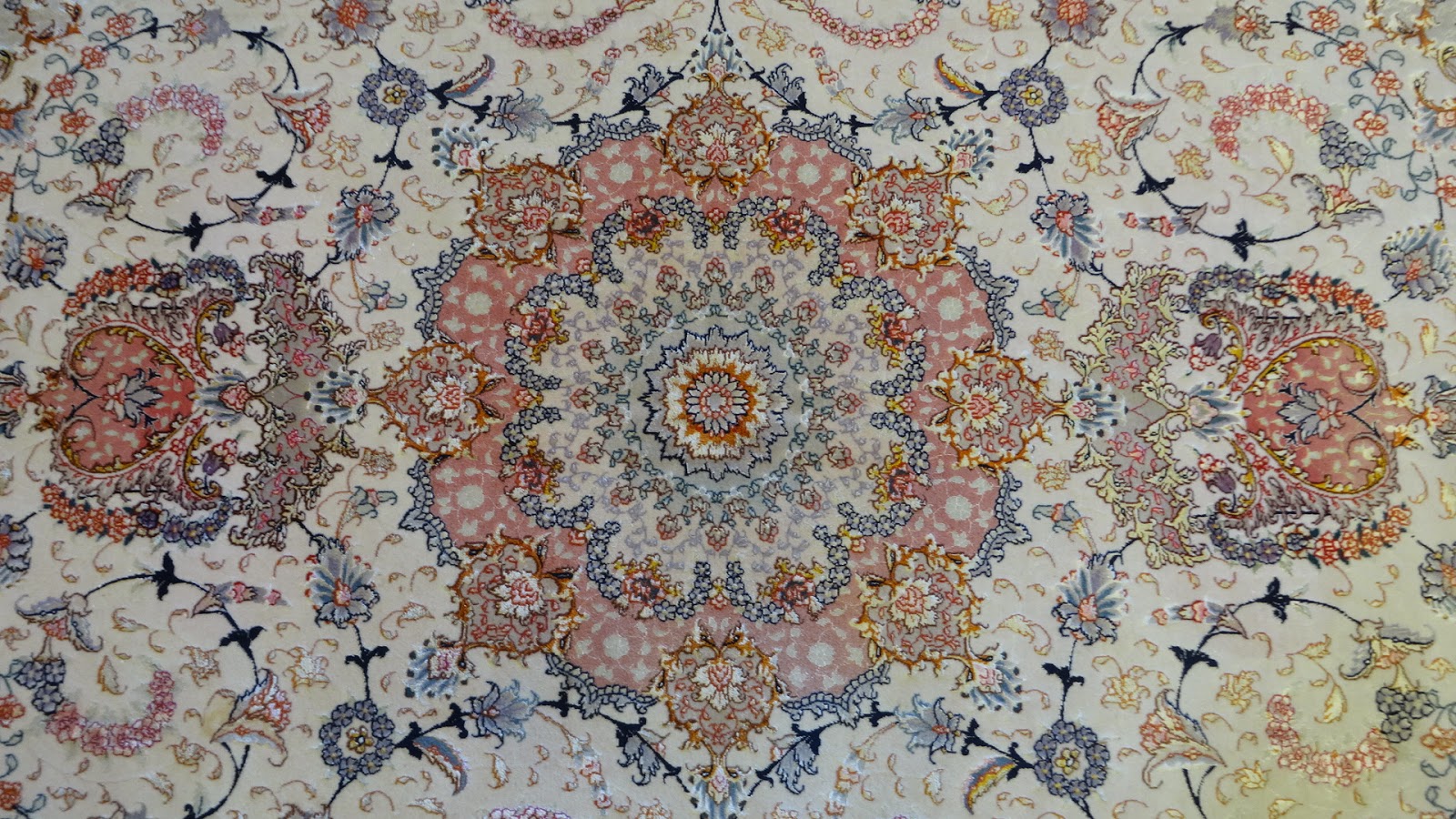 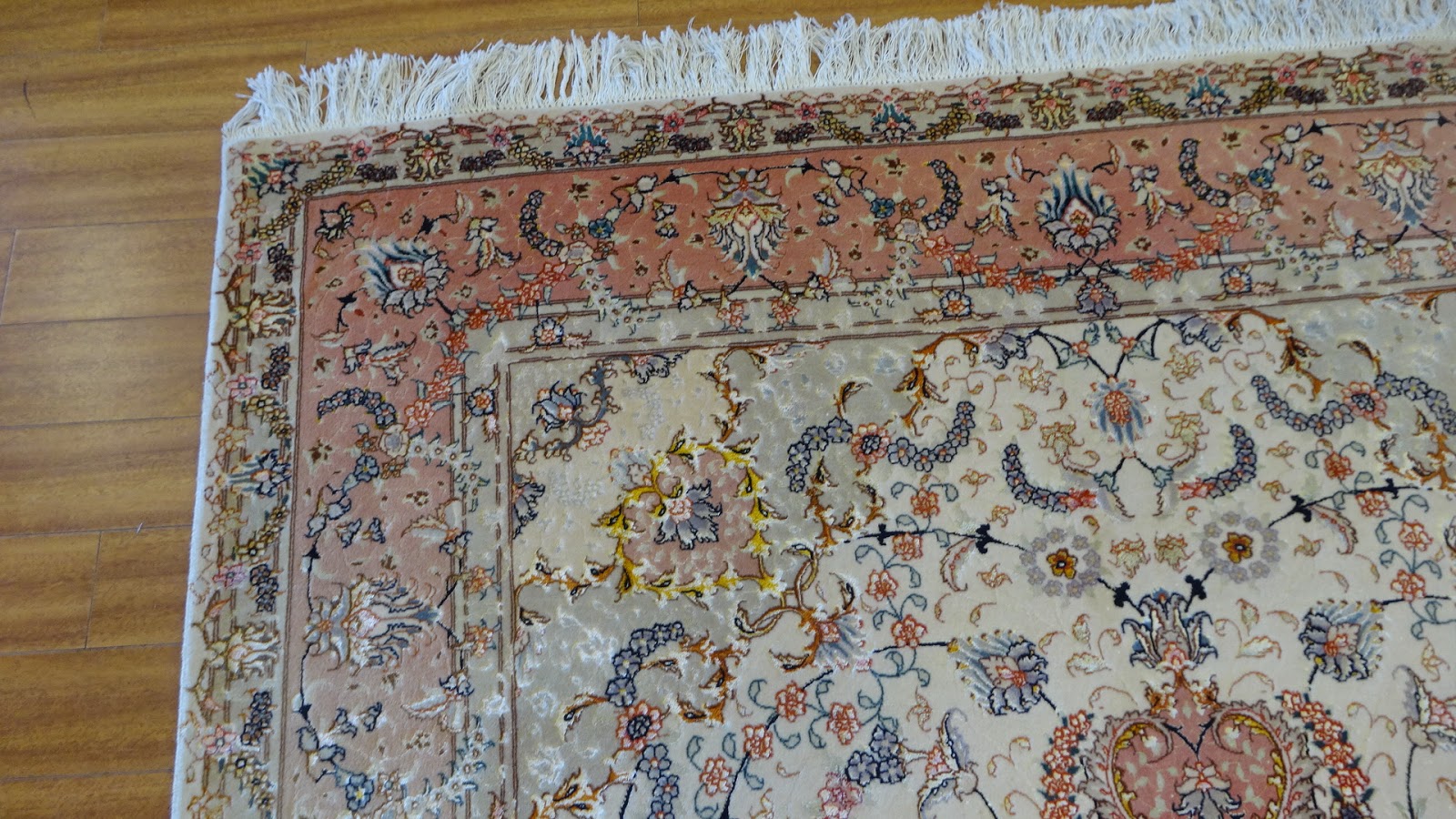 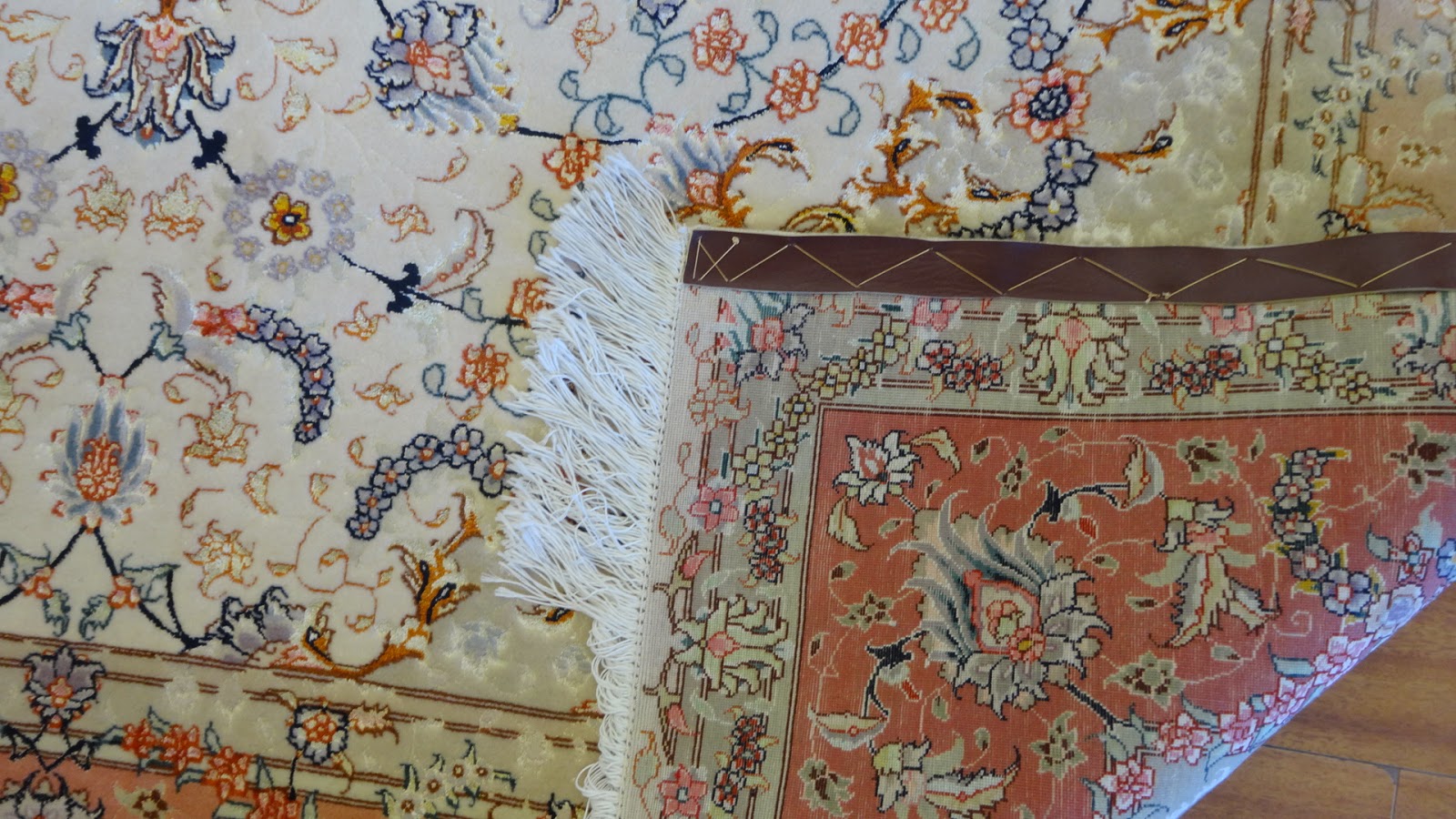 The size of her second Tabriz rug is 6' 6" x 10' 3" with baby lamb's wool pile and pure natural silk. The foundation is cotton. Due to high quality of this carpet and our recent deep cleaning, all the silk accents and flowers are highlighted and look soft and shiny. The design has four corners with a beautiful medallion in the center. This rug is a real work of art and adds class and character to the room in which is used. The knots density of this rug (KPSI) is high and is around 300 per square inch. This type of rug is also investment and its price appreciate by the passage of time. Her asking price for this piece is $5,800. To make it easier for out of Los Angeles buyers, the shipping cost by UPS ground to all 48 states in the U.S. continent (except Alaska, and Hawaii) will be paid by our client. Therefore, buyer will not pay for shipping, and there will be NO commission, wrapping, handling or other fees to pay.

Please contact us for other details and payment/shipping arrangements.