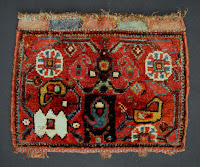 A very well received Antique Rug & Textile show will be held in San Francisco between October 15 to 26, 2009. More than 30 dealers from around the world will participate in this unique show.

Jozan Magazine, a very fine and informative rug and textile online magazine is cooperating with this exhibition. I will visit the show and many other rug enthusiasts, scholars and dealers will be there to visit the very fine and unique pieces which will be on display. Those who can, should not miss this opportunity. 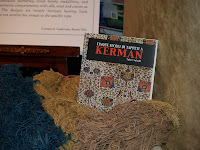 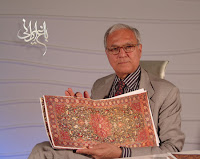 Dr. Taher Sabahi who lives in Torin, Italy is a great Oriental carpet scholar. Sabahi fell in love with rugs 45 years ago. He has written 18 books on different types of rugs and kilims. His latest book on 500 years of rug weaving in Kerman, Iran was published in Italian last year. This book is being translated into English and will be published in late 2009.

Taher Sabahi is the Editor in Chief of a prestigious bio-monthly journal valled Ghereh, (Knots) which is published in Torin, Italy in English, German and Italian.

Dr. Sabahi is planning to come to the U.S. for a series of lectures and presentations. He will visit Los Angeles, Atlanta, New York, and Washington D.C.

Here I am posting tow of his pictures. In one picture, Dr. Taher Sabahi is sitting next to me in gray suite. 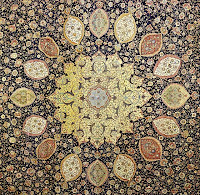 Later this year, Los Angeles County Museum of Art (LACMA), will exhibit the famous Ardabil Carpet for a short period of time, in November 2009.

There are two magnificent Persian carpets called the Ardabil Carpets. Their exact origins remain unknown. They are said to have come from a complex of shrines and mosques at Ardabil in North West Iran, the burial place of Shaikh Safi al-Din Ardabily, ancestor of Shah Ismail, founder of the Safavid dynasty. This dynasty ruled Iran from 1501 to 1733. At one end of the Ardabil carpet, a cartouche contains an inscription which dates to 1539/40 AD.

One Ardabil Carpet is in Victoria & Albert Museum in London. The other piece is in Los Angeles County Museum of Art, LACMA.

Here is some preliminary information on the piece which is in Victoria & Albert Museum in London :

Unknown to the Victoria & Albert Museum at the time, there was a more finely knotted second Ardabil carpet, which is now in the Los Angeles County Museum of Art. This carpet has lost its borders and part of its central field; a portion of the missing areas are used to repair the carpet owned by the V&A.

I will write more on this exciting and one of a kind event later.

Siawosh Ulrich Azadi is a great and knowledgeable rug scholar who works and lives in Hamburg, Germany. He has written a number of books and numerous articles on different aspects of Persian and oriental carpets and rugs. He has a beautiful rug gallery in Hamburg full of fascinating antique rugs. Oriental carpets and rugs has been his passion for many decades. He has traveled extensively to all rug making locations around the world to gather information on all types of rugs.

Lately we have been working on a full color postcard for one of our web sites which is www.LosAngelesRugCleaning.com. We designed, printed and mailed the postcard. 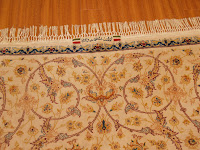 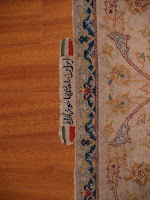 Sometimes we have to show off by doing a cosmetic rug repair. What we did on this fringe-less hand knotted Persian Isfahan carpet was one of those instances. The rug was severely damaged and we did re fringing and restoring the carpet as this damage was never happened. The owner who has been a dear friend was very happy with the job.

A Rug Tells The Biography of Its Owner 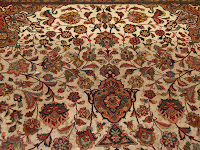 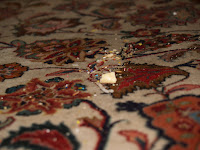 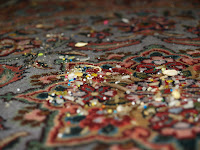 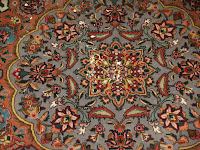 Once in a while we receive rugs which are extremely dirty, stained and full of filth. The owner does not even bother to vacuum it before dropping it off at our rug gallery. This is a fine Persian Tabriz rug in such a condition.

Being in love with rugs does not necessarily mean that you should not read or check other topics. I loved the KISS. I am sure you will love it too. Take a look:

Email ThisBlogThis!Share to TwitterShare to FacebookShare to Pinterest
Labels: rugs

A Must Read Comment on Rug Sales by RugRag.com

Although new, rugRag.com has become a very informative and active rug web site full of first hand news, information and tips for those who deal with and care about rugs. David Dilmaghani of RugRag.com has sent me a very interesting comment on rug sales and liquidations. It follows:

Dr. Sobhe, these sales are bad. We've been to many similar. It is important people know the best place to shop for a rug is at a rug store with proven integrity.

One recent 80% off sale was held at an otherwise "reputable" department store here in NY two weeks ago. "Retail values" the percentage to be taken off from were completely bogus... On the verge of outrageous and offensive.

Eventually we got the salesman to admit the prices were more than unrealistic. The salesman was adamant 80% off was his best price, but I decided to negotiate:

Within 5 minutes of discussion, I negotiated an additional 22% lower and he offered a pad. Had I pressed harder and offered cash to circumvent credit card fees with no pad, I am sure he would have gone down another 10%. This is a nation wide chain which I have never heard of being willing to negotiate. While I don't like doing this, I wanted to test the water.

After all was said and done, it was not nearly what I would consider "a deal". He kept telling me the rug was a 50-60 year old semi-antique, but it was a brand new (newer than 10 year old) Peshawar with aging wash!

Unfortunately for the public, rarely are there deals to be had with this type of sale. Suggested retail price in our opinion should be what the rug of similar type, quality, condition, origin, design, size and colors have sold for in the past.

Sellers such as the ones above are doing a disservice to the public and industry alike. It's unfair when sellers with integrity who have real sales with real prices marked 50% off to be compared with less reputable sellers such as this.

The article is titled "Mystery Shopping 80% off Rugs" and we have a short video too.

All the best,
David Dilmaghani,
www.RugRag.com
Posted by Rug Ideas Dr. Kay Sobhe (Los Angeles) at 11:35 AM No comments:

Rug Liquidation 79% Off the Original Price Plus Additional 15% Off!!

I received a letter from a liquidation company which was sent to my home yesterday. The title was: "Final Days! Absolute Emergency Rug Liquidation". It was also mentioned "For the first time since 1898, ... Liquidation Company has been assigned to privately liquidate twenty million dollars worth of rare hand-knotted rugs." The claim goes on and states: "The entire inventory is one-of-a-kind and is marked down absolutely 79% the original ticketed price on sales for absolute emergency liquidation. As a preferred customer, you will ... save additional 15% off starting today."

There is no date for the start and end of the liquidation! Besides, 75% off plus additional 15% because I am so special would come to a total of 94%. This means I only pay 6% of the value and the price of the rug to buy it!! The liquidation will be held in Pasadena, a city some 20 miles north east of Los Angeles. Who are these people? Do they expect potential customers to believe in these big claims?!

What do you think?

The Flowers Carpet: Brussels in Bloom

One million begonia flowers were used to make this 300-meter flower carpet in Brussels. Click here to see the pictures.