Few months ago, we picked up a big 12' x 16' 4" hand knotted Persian Tabriz carpet from house of a client in Long Beach, 35 miles south of Los Angeles. Although this rug looked very old to me, it was almost in perfect condition. It needed a good hand wash and securing the ends to make sure knots at the ends do not come off. The owner of the rug had no idea of the rug, its origin, age or the value. This rug had a signature in Farsi which read" Fabric Seyed Eskandani". I knew that there was another Seyed Eskandani rug, a small piece around 4' x 6' which was sold in Sotheby's auction in 2009 for almost $,8000. This rug had come from the same workshop in Tabriz north west Iran. This rug must be something extraordinary. Why? Because of its age, huge size, signature, great condition, and amazing non-repetitive asymmetrical animal combat design which dated back to the paintings of Agha Mirak, a master artist and painter in the Safavid Dynasty courts of the early 1500s.

We took the rug to our rug gallery and did the cleaning and restoration. This magnificent carpet was then delivered to its owner. I did an extensive research about all aspects of this rug, and guess what? I found the third and fourth generation of the producer. The family lives here in Los Angeles. I made the arrangements with the owner of the rug and the family of the producer of this rug. The owner brought the rug to out store yesterday Saturday around 12:00 p.m. The Seyed Eskandani family came in around 1:00 pm,with the father named Mustafa, the grand son of the producer. Mustafa is around 70 years old and his father Mir Ali was the master weaver of this rug in Tabriz. The design of this rug called cartoon was drawn by Mustafa's uncle.

When Mustafa, his son, and his daughter came into our rug store and saw the rug with the signature of Mustafa's grand father, it was a scene of tears, and joy. Mustafa asked the owner if he could kiss the rug which was woven 100 years ago by his father in his grand father's workshop in Tabriz. Permission was granted and Mustafa now in tears kissed the signature and another part of the rug. It was very touchy moments and scene captured by our photo and movie cameras. Mustafa inspected the rug inch by inch and his son and daughter were amazed at what their great grand father had produced some 100 years ago. The owner of the rug left our store and told me he wanted Mustafa and his family be left alone with the rug. They stayed for another hour taking pictures and videos themselves from the rug. They were overwhelmed and we were touched. 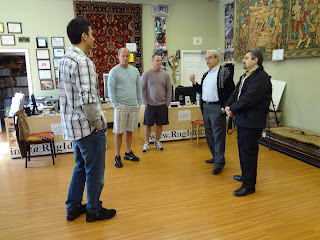 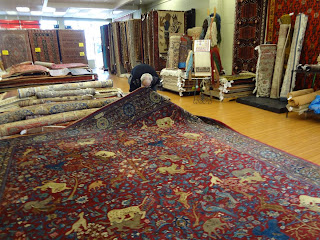 Mustafa, the grand son of the producer is kissing the rug. He said it smelled his grand father. 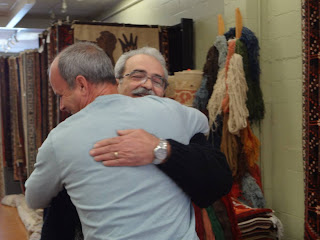 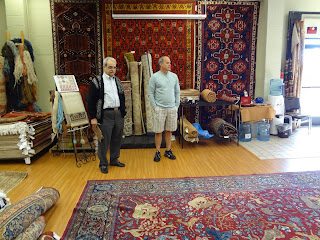 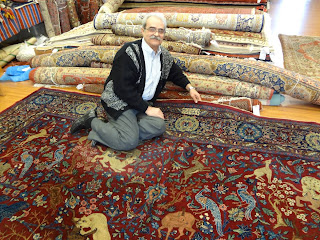 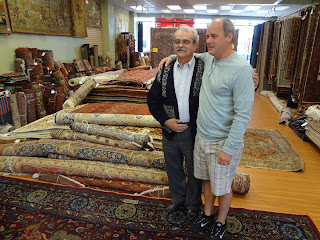 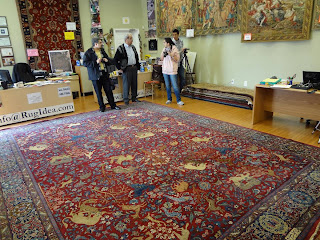 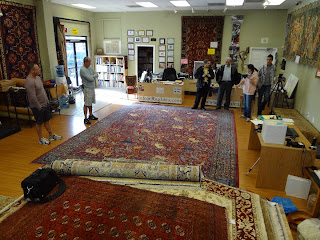 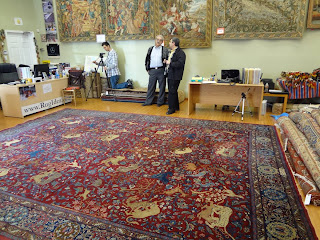 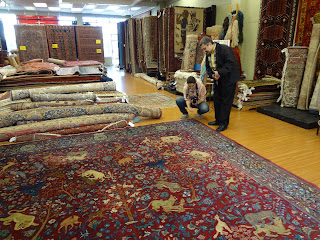 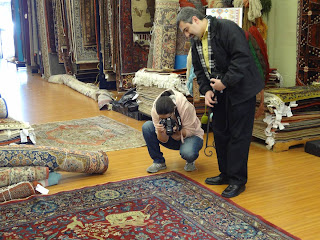 What an amassing story . thank you for sharing it with us .

Thank you David. It was very touchy to see the grand son of the producer who is 67 years old now cry when he saw the rug and asked for permission to kiss the rug.