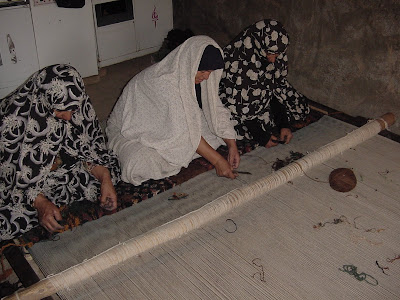 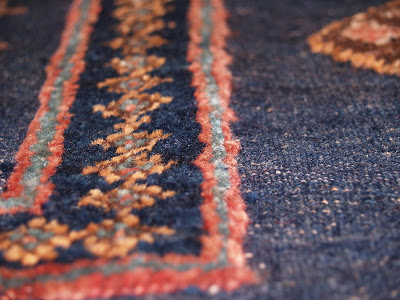 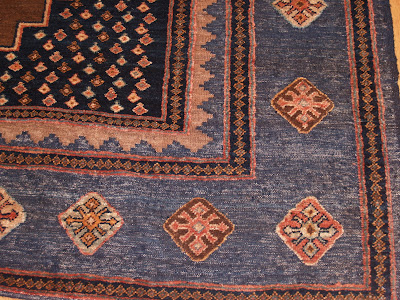 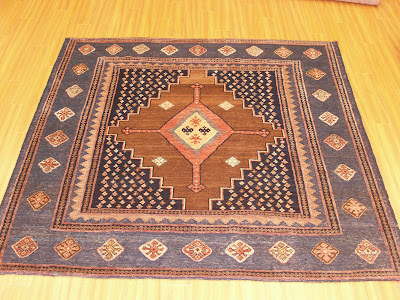 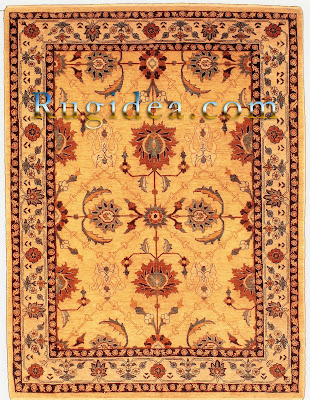 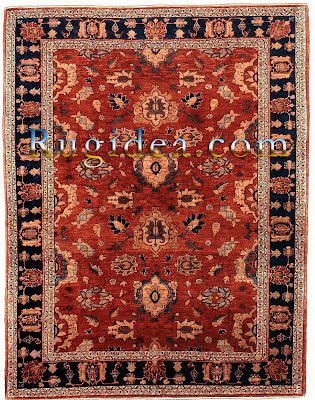 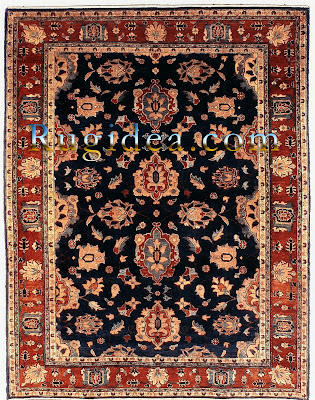 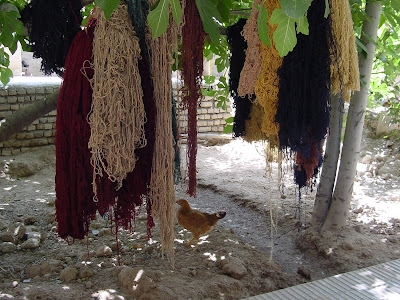 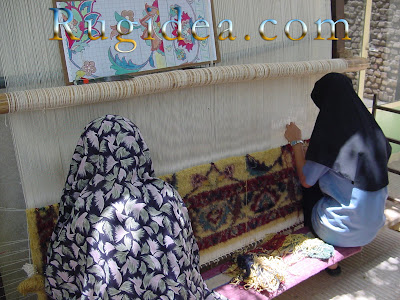 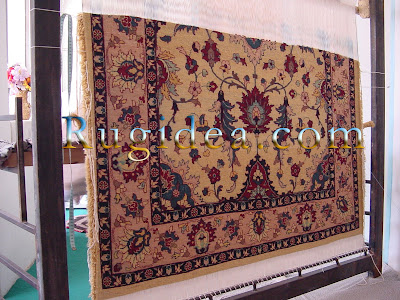 We produced Gabbehs rugs for many years in the province of Fars in Iran. The city of Shiraz was our center and headquarters in Gabbeh production. In 1995, we were looking for another place with rug production traditions closer to Tehran where we lived, worked and had our offices and warehouses. We considered several cities such as Qazvin, Kashan, Arak and few other places with rug making history. We found the right weavers in Varamin (Veramin), an old town with excellent carpet weaving traditions and culture 25 miles south east of Tehran.

A Brief History of Varamin

Tehran became the capital of Iran in 1795. Many head of the tribes moved to Tehran either by their will or by the Shah who wanted to disperse them in order to diminish their power so they could not question and fight the central government. Tehran did not have the facilities and the infrastructure to place all these tribes and their horses, sheep, and goats. The neighboring Varamin which was the backyard of Tehran was an ideal place for their residence. Several Arab, Azari, Lor, and Kurdish tribes migrated to Varamin and its suburbs. Animal husbandry and farming was their way of living. Tehran became a huge consumption market and provided a good venue for the farm products. The means of transportation were horses, donkeys and camels. Many of these tribal people knew how to make rugs as it was in their culture and a part of their family traditions. We exploited this craftsmanship in Varamin weavers.

We started with 5 looms and in 2000, and we reached at our record of having 120 looms scattered in several small villages around the city of Varamin. We found few old Varamin carpet designs but those had to be modified. We gave the old designs to a master designer called "Master Moussavi" in Tehran carpet bazaar to modify. The sizes for the new carpets were also to be modified to fit the American rug sizes such as 4' x 6', 5' x 8', 6' x 9', 9' x 12' and 10' x 14'.

Having a centralized carpet workshop in rural places in Iran is next to impossible and that is due to legal procedures (tough workman's compensation laws and insurances), cultural and traditional barriers, and so many other variables. Therefore we had to set up our looms in different homes and this made our supervision very difficult and time consuming.

The majority of our weavers in Varamin were adult women but in some cases we had men weaving rugs. It is not part of the culture to have kids work on looms to weave rugs. On the other hand, there is a very strict law prohibiting kids under 14 to work in carpet workshops or homes. All the kids of the weavers attended school while their mothers or in rare cases fathers wove rugs. When I went to Varamin to see the progress of the jobs, mostly on weekends, I took a big bag full of pens, color pencils, crayons, note books, books and candies to distribute among the kids whose grades were B or higher. To my surprise, many of the kids had A grades! Why? Because working hard is part of their family culture and traditions. These rural kids are not spoiled like urban and city kids who have everything they want, but are always bored.

If the weavers worked constantly and full time meaning 8 hours per day on a rug, they could weave 2 feet on the length of the rug per month on a 6'x 9' loom. We paid them by the yardage and the square meter, so they were not our employees and were considered independent contractors. The weavers were not on payroll and did not receive an hourly wages. It was up to them how many hours of work they wanted to put in weaving a carpet. If the speed and the quality of the work were satisfactory, they received bonuses and a new job when they finished the rug they had worked on.

One of the old designs was called "Pashotori" or "Came Foot" design which resembled the foot stamp of a camel. We prepared the cartoons (designs on graph paper) for all mentioned sizes.

Another old design from Varamin was called "Shah Abbassi". We modified this design and made the Shah Abbassi motives and flowers bigger.

Some times our customers asked for asymmetrical designs and a little out of balance designed rugs. We created such design and produced several pieces of these rugs in Varamin. Traditionally, there was a contrast between the color of border and the background in Persian carpets. For example if the color of background was red, the color of border was dark blue or visa versa. Recently, there has been a shift in demand in this regard. Therefore we produced some rugs in Varamin with Ivory background and borders. Below, you can see a picture of a rug with this type of color palette and out of balance design.

We produced many Varamin rugs for Atiyeh International Ltd. of Portland, Oregon. We had several trips to Varamin with Tom Atiyeh between "2000" to "2003". Tom provided us with very good information on all aspects of the American rug market and the customers' tastes.

We produced all our Varamin rugs with hand spun fine quality graded wool with natural dye. The quality of the dye in Varamin was not satisfactory, so I asked my good friend master dyer Abbas Sayahi in Shiraz to dye our hand-spun wool and yarns. We shipped our cargo of yarns from Varamin to suburb of Shiraz, where Abbas Sayahi's dye plant was.

We produced our Varamin carpets in three main color palettes of Burgundy (deep red), Dark Blue, and Ivory. For the red, we used root of madder which were seven years old grown in the desert in central Iran. Cochineal is not grown in Iran any more and is imported from south America, the Caraibe Islands and India. Since it is imported, cochineal is very expensive compared with locally grown root of madder and there was no need to use cochineal. If we needed darker and deeper red, we asked master Abbas Sayahi to mix the root of madder with a little bit of walnut husk in the dye bath in which wool was boiling to get dyed. For the dark blue, we used indigo which is locally grown in Fars province.

At the beginning, we used wool warps and foundations, but it seemed to be a bit difficult to manage this as the wool foundation was softer and more elastic. The rugs could not be as straight as we wanted. We changed the foundation to cotton and our problem was solved. All our looms were vertical and our weavers who were from all these four ethnicities of Turk, Lor, Kurd and Arab, used hooks to weave rugs and the knots were all symmetrical. The knot per square inch of these rug are approximately 160.

In the past and before Varamin became famous for its rugs, making kilims and flat weaves was more common. All the kilims were woven on horizontal (ground) looms with wool foundation.

In one of our trips to Varamin, I saw a very old man who had an antique Kurdish Varamin Kilim Farsh, a combination of flat weave and pile rug. The size was almost 7'x 7'. Part of the rug in the center was made with un-dyed camel hair. I wanted to buy this beautiful piece but the man did not want to sell it to me. I said I would buy it from you with any fair price you give me but he rejected my offer. I said at least let me take a picture so we may reproduce a piece like this. The man agreed. We prepared the cartoon and made few pieces. Three female weavers worked on these kilim-farsh rugs. Two were rug weavers and one woman did the flat weave part. I have one of these rugs in my carpet store in Los Angeles. The central part and some motifs on the borders are pile rug and the rest is fine flat weave. The size is 6' 6" x 6' 9".