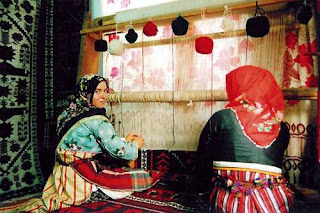 Persian carpet sanction or embargo which prohibits the legal import of Persian rugs into the United States will go into effect as of tomorrow, September 29, 2010. This is part of the plan to encounter the Iranian government for its nuclear programs. Let me run some numbers to see who will be hurt. The government of Iran or the people.

Now, let me go to some Persian carpet statistics. There are roughly 1,200,000 carpet looms in Iran scattered throughout the country. Usually two weavers work on each loom for many months to make one piece of Persian carpet. If we assume each weaver (male or female) has two children, four people depend on the income derived from one carpet loom. Four people, times two weavers/loom times 1,200,000 looms become 9,600,000 people, benefitting from weaving rugs in Iran. There are roughly 400,000 people working in industries related to rug production in Iran. They work in shearing workshops, in dyeing plants, washing factories, buying/selling local markets, export sector and etc. All together, it is safe to say out of 75,000,000 population of Iran, roughly 10,000,000 people depend on and benefit from Persian rug industry, directly or indirectly. Usually, rug weavers are the poorest of the poor. Iran roughly exports $700 millions of rugs every year. Compared with $73 billion of oil revenues, This is roughly one percent of the total country’s export of oil per year. This is one cent to a dollar! Thanks Washington D. C.!

No brains! just making fun of themselves. It is like the ban on Havana cigars, it is a joke. What will they get out of this if they put sanctions on pistachio, rug, and Iranian foods? What else was coming from Iran to the US? The Iranian government sells oil and doesn't care about carpet. It only hurts individuals and pistachio/carpet lovers like me!

Thank you for your comment. Yes, Persian carpets are produced and exported by private individuals not the government of Iran.

This is so sad... I would like to see the rug industry get an exemption from this ill-conceived embargo.
This hurts businesses in the USA as well!