Today is April 22, 2008. For the past three decades, April 22nd. has been observed as the Earth Day in the United States to inspire awareness of and appreciation for the Earth's environment. At our company RugIdea.com every day is the earth day and that is because of our commitment to the environment, to the weavers, and to the end users. We have several Persian rug production lines in Iran to produce Green Rugs with hand spun wool and natural dye. These rugs are produced in several parts of Iran. One of our customers who bought two of these rugs called Gabbeh rugs, came back to our rug gallery few days later and said "Not only my husband liked the rugs I bought, but my dog also liked them by sitting on one of the for a few hours". I said your dog might have noticed that there was no chemicals in the dye and no synthetics in the materials. Every thing was from the nature, and this was why your dog liked the rugs. 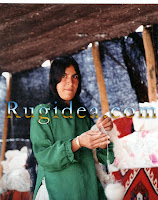