Blue, Its History and Its Usage in Textiles and Oriental Rugs and carpets 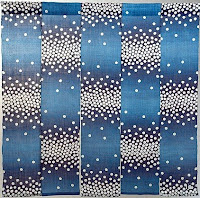 On Saturday June 7th, I attended a very fine and interesting lecture called the "Blue" delivered by Lee Talbot of the Textile Museum of Washington D.C. here in Los Angeles. It was held in the Sotheby's building in Beverly Hills and the Textile Museum Associates of Southern California TMASC was one of the organizers of this event. It started at 10:30 am on Saturday morning with refreshments followed by the power point presentation. Originally, another program was planned to be presented by Mr. Daniel Walker, the Director of the Textile Museum on Mughal Carpets of India. Because of unexpected circumstances, Mr. Walker could not make it and Lee Talbot 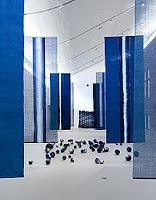 filled his place with another topic, the Blue.

Cheri Hunter, the past president and present program chair of TMASC introduced the speaker. Lee Talbot presented the materials and the slides in a very relaxed and friendly way without reading his notes. He maintained a very good eye contact with the audience of roughly 100 people. This lecture was the subject of a similar exhibition in Textile Museum which started on April 4, 2008. It will last until September 18, 2008.

The speaker talked about 4,000 years of history behind using indigo plant as a dye stuff in Egypt, India, Prue, and China. He mentioned that it was in 1897 when the synthetic indigo was introduced and people started to use it for textiles and rugs because it was cheaper and easier to dye the wool, cotton and linen with it compared with

the natural indigo. Mr. Talbot then introduced few artists who have done enormous work with indigo and mentioned some names such as Hiroyuki Shindo (from Japan), Rowland Ricketts ( from America), Eduardo Portillo and Maria Eugenia (from Venezuela) and Mary Lance who is making a documentary on indigo.

The program finished around 12:00 pm followed by a 15 minutes question and answer session. It was very educational,informative and fun. I also met many good friends there. Many of us met again later in the afternoon in our society's Patron event in the house of the president of the Textile Museum Associates of Southern California, David Ruderman. He gave us a tour of his collection including beautiful rugs and textiles. I should thank him and his wife Cindy for hosting us.