A Phone Call From Baghdad and a Silk Persian Qum Rug 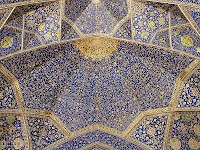 It was Saturday today here in Los Angeles. I received a phone call early morning from Baghdad, Iraq from a US army personnel who was going to come home in a few days. He would like to buy a silk Qum Persian rug from Baghdad and he wanted to get some information about this kind of rug and its price. The design as he mentioned is the dome design, which is inspired by the inside ceilings of mosques, which typically feature colorful and star shaped ceilings. Dome is the synonymous for Gonbad in Farsi. This 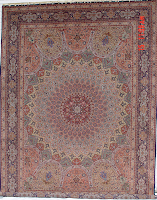 I asked this army personnel to e-mail me few pictures from the rug, back and face and from the signature of the weaver and told him first, he should be concerned with the good condition of the rug and whether the rug is a genuine Persian rug or a fake one. Then we should be concerned about the price. He said he could e-mail me the photos in one day and I said I would get back to him immediately after I receive the pictures.

This gentleman had googled information about silk Persian rug and had found my rug blog and then my web site. Isn't this interesting and fun. This gives me more incentive to write on rugs in my blog!

Yes. I too found your blog before finding your website. I'm from Siingapore, which is half a world away.