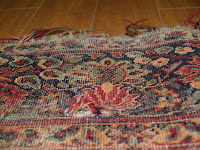 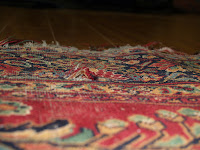 Hand knotted Persian Sarouk rugs (also spelled Sarough, or Sarouq) were popular in the U.S. in the early 20th century. Many Westerners and Americans went to the city of Arak, then called Sultan Abad and produced Sarouk rugs for the American market. The export of this type of rug with a kind of overall floral design and thick pile increased in volume between the two world wars. During the years 1920 to 1940, thousands of these rugs called the "American Sarouk" produced in Sarouk, a small town in the province of Arak were imported and poured to the U.S. Some manufacturers produced machine made American Sarouk rugs as well those days to respond to the huge demand especially for those customers who could not afford buying a hand made American Sarouk.

Once in a while, we receive one of these machine made old American Sarouks for cleaning and repair. Here, I am posting a few pictures from one of these area rugs which we cleaned and repaired. 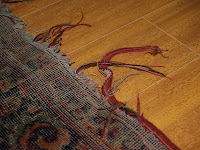 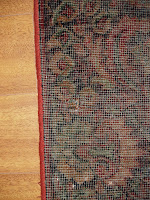 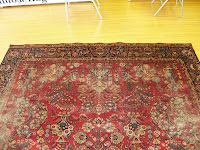 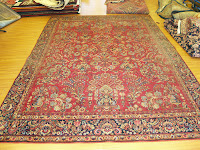