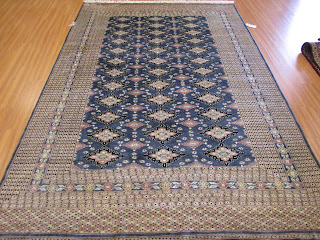 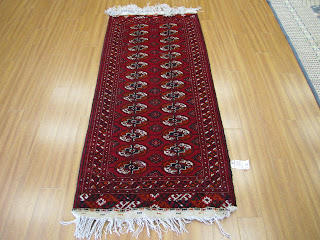 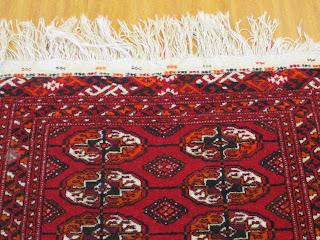 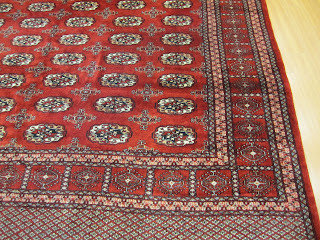 Bokhara is a province in Uzbekistan. This country has 14 provinces with the total population of 30 million. Bokhara province has a population of around 2 million. Bokhara was a center for the trade of Turkmen carpets. These carpets had and still have a design with repetitive stylized geometric octagonal flower called Gul. Turkmen weavers used guls in rows and columns in their carpets. This design has been used in many other regions and countries around the world. It has been called Bokhara and Pakistan has been producing Bokhara design carpets since many decades ago probably from the 50’s.
Pakistani carpets with Bokhara designs were very popular in the 60’s and 70’s. Many of our customers who have Bokhara carpets made in Pakistan have bought these rugs in the 60’s and 70’s. Some people still like Pakistani Bokhara carpets and we receive these rugs quite often for cleaning and repair. Some of these rugs are made with New Zealand imported wool which has a silky and shiny look. Others are made with local Pakistani wool with less sheen, and luster with high pile.

This Gul design is also widely used in Afghan rugs. The Afghan rugs mostly have wool foundations while the Pakistani's have cotton foundations.
These Bokhara Pakistani rugs were hot items in the 70’s, but there is no such a high demand for these rugs anymore. Pakistani producers and weavers have now shifted their attention to other types of rugs with less geometric, but more relaxed designs with big flowers and motifs.
Dr. Khosrow Sobhe (Dr. Kay)
Certified Rug Specialist (CRS)
www.LosAngelesRugCleaning.com
www.RugIdea.com
Tel. 310-770-9085
Posted by Rug Ideas Dr. Kay Sobhe (Los Angeles) at 11:21 PM

Hi there Dr. Kay, a comment from Sweden. You write about Pakistani Bokhara carpets that;”... we receive these rugs quite often for cleaning and repair." As I, among other types, also sell that kind of rugs & carpets I wonder in what state you usually receive them? Even if the level of demand for the Bokhara design is far from what it once were we still do sell a lot of them here in Scandinavia. Otherwise you’re right and after what I can judge the trend is pointing towards Turkmen carpets (former Afghan) with its many different tribe related Guls. BTW, the rug & carpet trade, here in Sweden anyway, have in a routine fashion classified any rug or carpet with Gul design as Bokhara or Butterfly. I for one will move away (right or wrong) from that and classify my rugs & carpets by a system that includes a name, design and quality, e.g. Mori, Cherri, 9/14 2Ply. Turkmen, Ersari, Khal Mohammadi.
Pak Ziegler, Sultanabad, Chobi. And so on.

Hi Swed. Thanks you very much for your comment and following my blog. We are located in Los Angeles in southern California.

This type of design is not a favorite of today's customers at least here in the U.S. market, that maybe why weavers and producers have shifted towards Choubi, or Zigler Sultanabad type of designs. Of course there are still some people who like this type of Bokhara Turkomen Gulk design. The market for old/antique Turkmen rugs is high here in the U.S. amongst collectors and antique dealers. Thanks again.

Your rug gallery is amazing. The designs are very detailed and beautiful. And, I bet those will look great on oriental themed houses. Putting one in your home will definitely add some ethnic atmosphere.
Wilbert Padilla

I have a rug that I think is Bokhara. Could I send you a photo?

Yes, please send us a couple of pictures to info@rugideas.com

Seriously i love these rugs. These designs are awesome. I am offering all type of rugs. If anyone want to buy handmade rug at reasonable prices then visit our website.

You got amazing collection of Bokhara rugs and keep sharing such amazing ideas.