In the fourth quarter of the 19th century, a huge market was created for Persian carpets in Europe and in the U.S. Many companies and merchants imported the old and antique Persian rugs from allover Iran. They used the city of Tabriz in northwest Iran to export these antiques to Europe via Arzerum in Turkey. Some merchants also used the southern ports on the Persian Gulf to export Persian rugs to the U.S. by ship which was way cheaper than the land and then sea transportation via Europe . By the later decades of the nineteenth century, the supply of these fine antique rugs from Persia was on the low side. Beside, the existing Persian carpets did not match the western sizes and the taste of color and design. Westerners want everything their ways! Therefore, many of the merchants from Tabriz close to the Turkish borders decided to establish workshops in Sultanabad to produce rugs based on the western demand. The Sultanabad region had a fine carpet weaving tradition and was a perfect place to set up looms and rug workshops. Sarouk, is a village located 30 miles north of the city of Sultanabad (today called Arak). Sarouk is famous for weaving very heavy body carpets. Workshops and looms were sat up in the region.

To meet and fulfil the rising demand in the west for Persian rugs, the British-Switzerland company of “Ziegler    & Co.” opened its office in Tabriz in 1878 and in Sultanabad in 1883. The first World Oriental Carpet Exhibition of 1891 in Vien and another one London in 1892, created  a rising demand for Persian rugs in the west and other foreign companies such as British-Italian “Nearco Castelli Brothers” in Tabriz, and “Eastern Rug Trading Company" of New York established their branches in 1909 in Tabriz and later in Kerman. Atiyeh Brothers of Portland, Oregon, also established their weaving facilities in Kerman after the turn of the century. 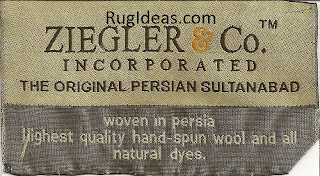 Of these cities, Sultanabad and surrounding towns and villages such as Sarouk, Farahan, Lilian and  few others were the most famous in the U.S. After establishing the offices and branches of  foreign companies, the designs were created based on the customers tastes and demand and a new types or Persian rugs were produced. The kind of rugs today called Ziegler, or Sultanabad were produced from the end of the 19th century to probably before the beginning of the WWII with the designs and color combination that Europeans Americans liked. Muted softer colors and floral latticed patters. What we see today in the market called "Ziegler" or "Sultanabad" is either new productions or old pieces with muted colors and big flowers and floral designs without central medallions. And no one can prove or dis-prove that they are made by or for "Ziegler & Co." in Iran during the 50 years that they were active. Ziegler or Sultanabad carpets are good quality Mahal rugs with easily pliable and soft handle.

One later group of these rugs is called "American Sarouk" with deep burgundy background color with no medallions in the center. 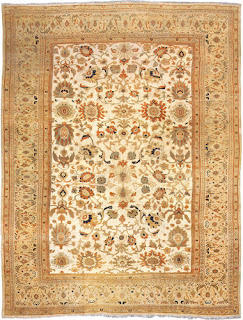 Email ThisBlogThis!Share to TwitterShare to FacebookShare to Pinterest
Labels: Ziegler and Co.

Hello,
Very informative post on carpets rugs. I came to know many things about carpets rugs. Enjoyed reading your post. Thanks for sharing.