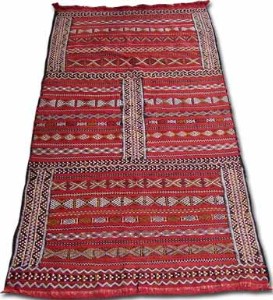 Morocco is a constitutional monarchy with a population of mainly Arab people, but there are also many Berbers, Kurds, and Persians. Berbers were the original inhabitants, but the country was occupied by the Romans and the Carthaginians for relatively short periods, and then it was invaded in the 7th century by the Arabs, who became the major ethnic group. Spain and France ruled different parts of the country during the 19th and early 20th centuries, but in 1956 Morocco became an independent country . Moroccan kilims are produced by tribal, regional, and contemporary workshop weaving groups, and Morocco is the largest exporter of kilims from North Africa, although there are a number of ethnic weaving groups in Algeria and Tunisia, and Berber influence is very much in evidence in regional and workshop items throughout the area. The pieces are generally of good quality and attractive. 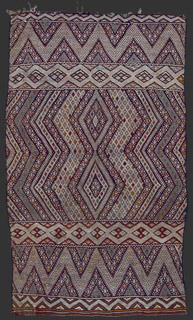 Today, the best authentic weaving in Morocco is produced by nomadic, seminomadic, or settled weavers in the Tennsift coastal region, and in the High and Middle Atals mountain ranges by weaving groups that include Berber, Azrou Boujaad, Hanbel, Oudzem Taznakht, and Tiffelt. Individual tribes each create their own particular rug designs, primarily for household use or to sell at local markets, and only a few of the larger groups produce enough work to make a significant impact on the western market. 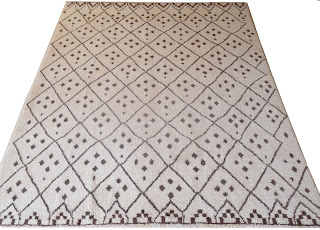 Market Atlas tribal weavings include Beni M'Guild Kilims, which are usually fairly large, with decorated bands and square compartments in dark colors with white outlines. Beni M'Tir kilims are similar, but these are often made up of repeating diamonds. Ben Quarain kilims are small to medium size, often in alternating stripes of single colors, with highly intricate, weft-faced patterning in contrasting colors. Zain and Zaiane kilims are similar, and available in a variety of sizes using dark colors. Zemmour are mainly large, and often in bright colors on a pale red ground.