The cat rugs of Paotao were woven in the early 20th century. Paotao is close to Mongolia, a cold, rugged and dusty land, and the rugs were used for sitting or sleeping on. But tigers and leopards have been portrayed in Tibetan rugs for over 100 years. They were originally woven for the high lama to sit on, but as the animals became scarcer, rugs woven with tiger and leopard images, abstract stripes, full skin, three-dimensional body and head designs, paw prints and spots appear. 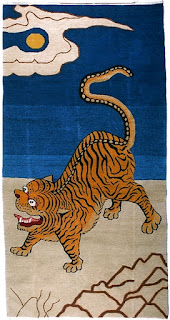 The term 'tiger rug' usually refers to rugs woven in Tibet, although such carpets are woven in the same regions as carpets with dragon designs, too. The designs are usually based on tiger skins rather than on the live animal, but occasionally it may be highly abstract with perhaps a small square of stripes surrounded by a wide border.           . 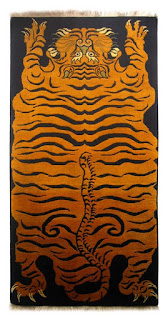 Some rugs provide realistic, almost cartoon-like representations of tigers, but they are not always classed as tiger rugs in the trade. Tigers are the lords of the mountains and woods, joint controllers of winds and water, the traditional enemy of the dragon, and associated with strength, virility, and the West.  Symbolically, stylized tiger rugs may represent aspects of Tantric meditation. Excellent copies of old tiger rugs are produced in large numbers today in Tibetan/Nepalese workshops.