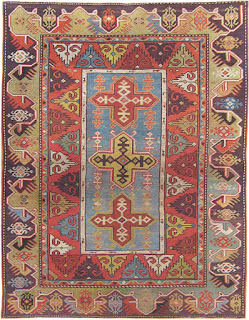 Bergama, Kula, Ghiordes and Melas are among a cluster of villages whose traditional carpets from the Classical era include large and small pattern Holbeins, carpets with double niches, and prayer rugs with the typical keyhole and arrowhead designs. Melas creates some of the most authentically Anatolian items produced in the region. The most popular and distinctive design is the tree-of-life in a very stylized form, and a geometric flowering diamond within a prayer rug. Melas prayer rugs have a recognizable arrowhead shape woven in warm colors. They have broad borders containing elegant, stylized floral and geometrical motifs. Colors are mainly pale umber, sienna gray, rust, ocher, and a greenish yellow that is unique to the area. Indian weavers are now copying Melas designs. 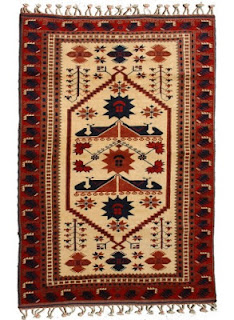 Bergama designs may be either Caucasian and resemble those from Kars, a major weaving center in the northeast of the country near the Russian border, or they be clasically Anatolian, such as those woven in Melas. In Kula and Ghiordes some traditional prayer rugs are still woven, but mostly rugs have floral designs, usually with a central medallion. 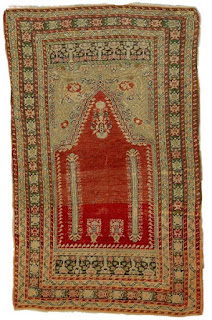 Ghiordes is the best known of Turkey's weaving centers, acclaimed for its better than average weaving, and it is the town that has given its name to the Turkish knot. It is renowned for its marvelous prayer rugs and double niche carpets. The area has recently introduced a broader range of Anatolian and Persian designs. Popular patterns that are woven here are naturalistic flowers, in the French style, introduced in the 1800's. Ghiordes carpets are easily recognizable because of the squat shape of the mihrab (niche) and the use of many borders.