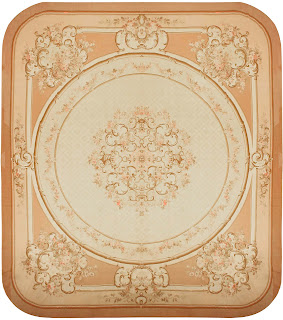 Seventeenth-century French hand-knotted carpets are rare today, but examples from the Savonnerie and Aubusson workshops are much sought. The name Savonnerie is a term that is often applied generically to all hand-knotted carpets of French origin, and indicates pile carpets of extreme luxury. The Savonnerie workshop was founded in 1627 in Chaillot, in a former soap works. From the start, the intention was to produce carpets of superb technical quality, using only the best materials and the finest knotting with a deep, velvet-like pile. Carpets were woven purely for the court or the state, and closely reflected the tastes of the period - heavy, scrolling acanthus leaves and dark grounds during Louis XIV's reign; rococo with twisting leaves and floral swags during the time of Louis XV; and a more restrained style for Louis XVI. 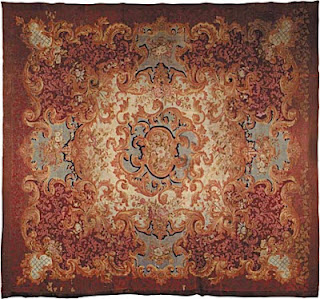 At Aubusson, an early tapestry-weaving center, two completely different types of carpet were woven - pile carpets, similar but inferior to those of the Savonnerie, in weaving and materials; and flat-woven carpets using the tapestry technique, which were quicker, easier and cheaper and were bought by the nobility and better-off merchants. They followed the stylistic evolution of Savonnerie carpets, but had simpler designs. The style of both Savonnerie and Aubusson carpets had an enormous influence on overseas production, so between the end of the 18th century and the mid-19th century, the French carpet became - even in the Orient and especially in Anatolia - the model to imitate. 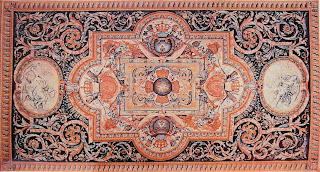 During the 19th century, a number of needlework schools came into existence in France and the United States, and a great many fine carpets were produced.