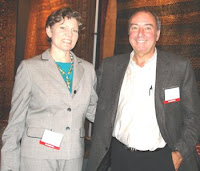 Last evening before we close our rug gallery, Leslie and Tom Atieyh walked into our store and spent an hour with me and my son Ashkan. Atiyeh family has been involved in rug production and import for more than a century. They are based in Newbury, Oregon.

I met Tom in 1992 in Tehran during the first Persian Carpet Grand Exhibition and Conference for the fist time and we became friends. For many years, we produced fine rugs for them in Iran in different provinces and cities such as Kerman, Shiraz and Varamin. Tom's father, Victor Atiyeh, was the governor of Oregon for two terms.

Atiyeh Brothers produced fine Kerman rugs in Kerman, Iran from early 1900 up to the Iranian Revolution of 1979. They have always cared and loved fine rugs and have nevered lowered the quality of their productions. They are lovely people. We have taken many trips together inside Iran to very remote places. Leslie has been to Iran several times by herself. Once we went to the city of Bam before its destructive earthquake which turned that ancient city upside down in 2003.