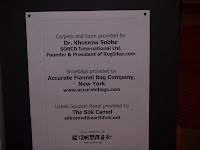 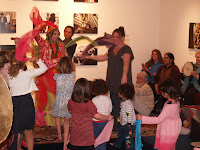 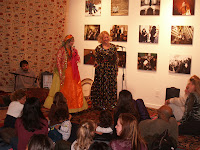 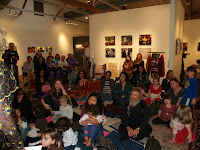 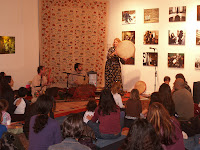 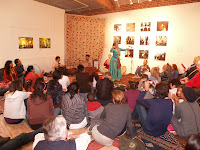 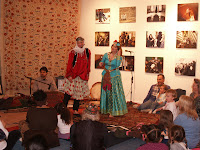 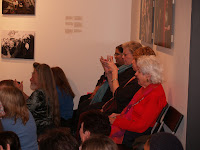 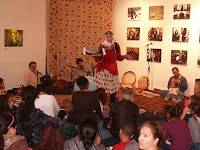 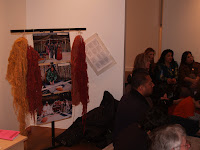 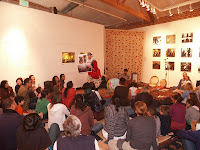 Yesterday, I was busy with a carpet concert at the Craft and Folk Art Museum (CAFAM) on 5814 Wilshire Blvd. Los Angeles, CA 90036. Rowan Storm, an American lady who took a 3-month trip to Iran in 2006, was the lady who played frame drum (daff) and dayereh, Robyn Friend another American lady who performed wonderful folk Persian and Tatjik dances along with Niel Siegle who played Tar, a guitar like Persian music instrument and Faraz an Iranian artist who played santur performed a remarkable performance. In her last dance, she taught how people could do Qashqai dance.

The music was so fascinating and enchanting that you could mediate and relax with it and feel weightless if you paid attention with your heart and soul and not the ears. I was blown away for minutes. The music and the whole event touched my heart.

It was a Persian style shoes-off concert. The participants were provided with beautiful fabric custom-made bags to put their shoes in. It was an evening of Persian music from different parts of Iran accompanied by some talks by Rowan on different cultural, historical and artistic aspects of the Iranian life with presenting many pictures Rowan had taken during her recent visit to different parts of Iran including Kurdistan.

I had provided the hand knotted Persian carpets on which people sat. We also had a loom and some hand spun yarns and rug literature. Cheri Hunter of the Textile Museum Associates of Southern California had lent the event a wonderful Suzani, hand embroidered in Uzbekistan to be mounted on the wall behind the players. The attendance was very good and actually better than expected. Since participants were allowed to bring in their kids, many children attended the programs which were presented in two parts.

Thanks to the hard work of the museum director, staff, and volunteers. Special thank to Holly Jeger the head of the Public relations who had worked so hard and selflessly for weeks to make this extravaganza possible.