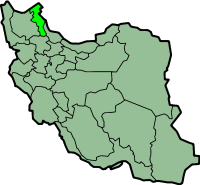 The city of Ardabil (also called Ardebil. It's ancient name was Artavil) is the capital of Ardabil Province in northeastern Iran with an area of 18,011 square kilo meters, bordering on the (former Soviet) Republic of Azarbaijan to the north and north east, Guilan province to the east and south east, East Azarbaijan to the west, Zanjan province to the south, a little inland from the shores of the Caspian Sea, and 588 km to the northwest of Tehran, Ardabil can be reached both by the road and air. It is located in an altitude of 1,300 m above sea level and is 210-km northwest of Bandar-e Anzali and 70 km from Astara on good asphalt, twisting Scenic Mountain road. The town is a market center for a fertile agricultural region; hand made carpets and kilims (gilim) are being produced there. 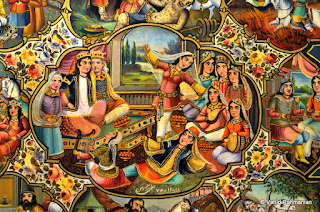 Other towns of the province of Ardabil are Bileh Souar, Germi, Khalkhal, Meshkin Shahr, and Pars Abad. The province has a population of 1,165,025 deeply religious inhabitants. Because of being situated at the foothills of Mount Sabalan, 4, 860 meters above sea level, the town has a pleasant weather in different seasons, thus attracting huge number of visiting guests from all parts of Iran. Ardabil was probably founded in the 5th century AD. It became (10th century) the capital of Azarbaijan, but was soon superseded by Tabriz. In 1220 AD it was destroyed by the Mongols. Ardabil is best known as the birthplace of the eminent
religious leader Sheik Safi od-Din (1251-1334) from whom the Safavid dynasty was descended. Sheikh Safi was the founder of a sufi order and monastery in Ardabil, the prime mover of Iranian culture during the 15-16th century and the center of the theocratic community of Dervish Brotherhood. Dervishes, after coming together under the same organizational structure, managed to attract and retain the attention of large masses in the towns and in the country. Ismail, a descendent of Sheikh Safi and who was later crowned as the Shah of Persia in Tabriz (1501), was himself a member of this order. The main objectives of Dervish Brotherhood were the elimination of the then rampant anarchy and the reorganization of a new state that could respond to the demands of the urban and the rural disinherited of Iran and satisfy the people’s thirst for justice. Shi’ism began to spread through mosques, monasteries and Dervish centers, and very soon conquered the masses. Shah Ismail created an immense empire: he succeeded in subjecting the many principalities that had formed after the fall of Timurid state. In 1510 he defeated the Khan and conquered Baghdad. The decision to uphold Shi’ism might be interpreted as an extreme endeavor to prevent the Iranian nation from becoming absorbed by the west (Ottomans) and the east (Uzbeks). The town was occupied by the Turks in 1725 and the Russians in 1828. Its proficient library was taken to St. Petersburg by the Russians.Mausoleum of Sheikh Safi Sheik Safi’s 14th –century tomb in the center of the city of Ardabil often enlarged and restored in later centuries, can still be visited. It houses the mortal remains of Shah Ismail as well as his saintly ancestor, who is reputed to have foretold the future, spoken to the dead and rescued those in danger at sea. The tombs are
surrounded by finely engraved wood panels with extraordinarily delicate ivory and precious metal inlays. 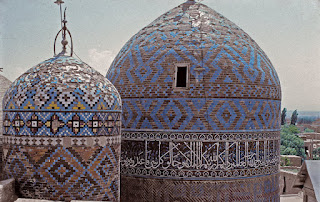 The complex of structures known, at present, as Sheikh Safi’s Mausoleum, consists of a portal, a porch, Sheikh Safi’s tomb-chamber, the Chini Khaneh (china hall), the Shahidgah (martyrdom site), the Khaneghah (dervish monastery), Qandil Khaneh (lantern hall), the Jannat Sara (heaven) Mosque, and others, and ranks among the finest historical achievement of Iranian art.The burial place of Sheikh Safi od-Din Ardabili as well as other Safavid kings, such as Shah Ismail, comprises the tombs of a number of princes, notables and generals of the Safavid period, including the tomb attributed to Shah Ismail’s mother, and those of Sheikh Sadr of-Din, Sheikh Junaid, Sultan Heidar and two generals, namely Sultan Ustajilu and Kurd Beig, the latter’s tombstone bearing the 1542 AD date. Apart from the above structures, the construction of the main portal of the mausoleum and three domes decorated with exquisite faience tile and inscriptions in the Kuffic and Riqa’ scripts, give considerable charm and splendor to this attractive historical monument. The decorative elements of the complex, both internal and external, consist of paintings, plaster moldings, stuccos and gold-toned stalactite decorations. 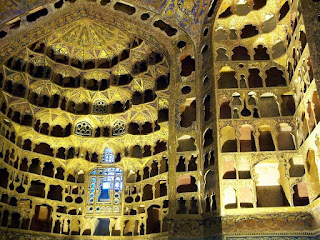 The structure of the Qandil Khaneh stands out among the rest both from the architectural as well as the plaster points of view. Sheikh Safi’s tomb-chamber is a cylindrical tower capped with a rather low dome, underneath which an exquisite carved box bearing an inscription in Riqa’ script covers the actual burial ground. The box is one of the finest movable treasure pieces of the mausoleum.The dome of Sheikh Ismail’s tomb-chamber is lower than that of Sheikh Safi, and is decorated on the outside with colorful tiles and an inscription in Kuffic. Under the dome in the chamber a fine, costly box rests upon the tomb. The shrine on Sheikh Junaid’s tomb together with three other boxes in the complex, are highly attractive on account of their superb carvings. There is a large vaulted hall next to the mausoleum wherein Shah Abbas the Great stored the collection of jade and porcelain given to him by the Emperor of China. Each object was placed in a gold-plated niche cut to size. The gold has worn off and most of the objects (except about a dozen dishes and receptacles) are now in Tehran museums. 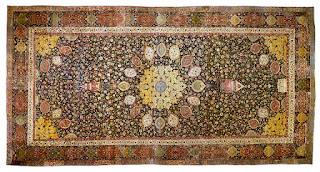 The oldest part of the complex belongs to the 15th century AD, the other parts having been gradually added, particularly under Shah Tahmasp I and Shah Abbas II, who spared no efforts to expand, beautify and repair the Safavid Kings’ eternal resting place. The most famous of Persian carpets, the so-called "Ardabil Carpet" (one of a pair) in the Victorian and Albert Museum, was presented to the mausoleum by Shah Tahmasp in 1539. It was actually made in Kashan. Ardabil Museum Originally called Chini Khaneh (Porcelain House), and part of Sheikh Safi Complex, it was inaugurated as a museum affiliated with the complex in early 1991. The architectural style of the edifice resembles that of Ali Qapu in Isfahan. It is an octagonal, domed room with four Shah Neshins ( elevated recesses). The stalactite works in this structure are considered as fine specimens of the constructional and decorative devices of the Safavid period. The Chini Khaneh, with its beautiful plaster work, is one of the most artistic and valuable parts of the complex, which is also notable for a number of fine and expensive wooden and silver doors. 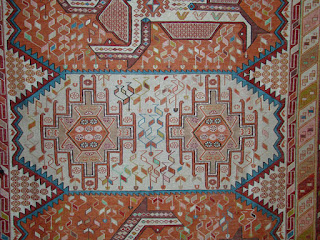 Varni Kilims
Varni, a flat weave and Kilim (gilim), a kind of rug and floor covering without pile and very decorative which is produced in the province of Ardabil is famous in the world. The designs are based on the motives of the surrounding environment mostly birds and animals depicted from the top of the head of the talented weavers of the region, all of whom are patient ladies who learn to weave varni from their mothers. Many of the varnies are made with silk. They are completely made of natural silk or partly silk, so called “Kaf Abrisham”, meaning with silk background. The designs are divided into frames and small cubes (squares) or rectangles in which the motives of the birds and animals are woven. Based on a report put out by the Iran Handicrafts
Organization, Ardabil Branch, there are 2,500 workshops in the province with 2,000 weavers along with 13,000 independent weavers which work in their homes and make 20,000 square meters (more than 210,000 square feet) of varni per year. The local market price for the whole production amounts to $1,000.000. To read about the famous Ardabil Carpet, a pair with one piece in the Victoria & Albert Museum (London) and another piece in Los Angeles County Museum of Art (LACMA) visit the related link on our website or CLICK HERE. 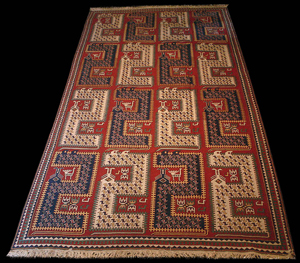