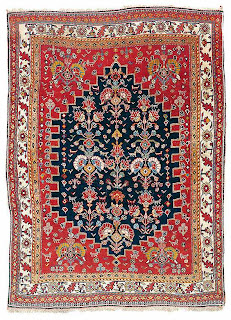 Weavers of highly desired Persian tribal rugs, the Qashqai people possess a history and culture rich in both struggle and inspiration. It is the combination of these two elements which give their rugs their unusual sense of spontaneity and aliveness. 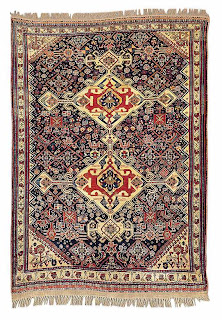 Since the Qashqai people for many generations inhabited Central Asia and the Caucasus before travelling to southern Persia, their weavings are enhanced by influences from all three regions. Similar to the rugs of the Turkmen people in Central Asia, Qashqai weaving has a boldness and directness, particularly in their dominant triangular central medallion. Through their sojourn in mountainous Azerbaijan, the Qashqai acquired the Caucasian weavers’ love of striking colors and daring combinations of tones. Finally, in their present location they have been inspired by the artistry of Persian city weaving, as well as by that of other nearby tribes. In short, Qashqai weaving synthesizes instinctive creativity with refinement, depth of color with richness of symbolism. 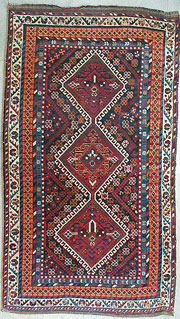 A weaver will work on their own rug for a period of time, move over to the loom of her neighbor, and then to that of yet another friend, before returning to her own weaving. At the same time, another group of women scour the nearby countryside, gathering mountain herbs, barks, and berries to boil in their collective dyebath. This continual interchange of creative energy, along with the deep spirit of interconnectedness of a people engaging together in simple physical activity, undoubtedly is a key element in Qashqai weaving. 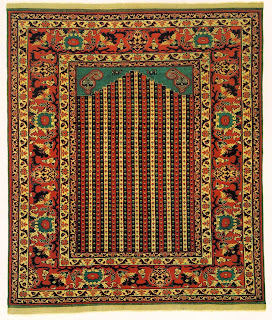 A large part of the Qashqai carpets’ tremendous appeal in the West is the weavers’ refusal to sacrifice quality for the sake of expediency. As late as the 1940s, when the weavings of most others tribal groups had bowed to the influence of commercialism which called for more coarsely woven pieces employing the much easier-to-use chemical dyes, there was almost exclusive use of natural vegetable dyestuffs and more traditional weaving techniques among the Qashqai. This attention to detail, in which each step of the weaving process was performed to perfection, is clearly seen in the tribe’s flatwoven kilims and various woven bags, both of which have received attention and admiration equal to their pile rugs. For a tribe which is on the move between summer and winter pastures at least four months a year, conveniently carried kilims and durable storage bags are of central value. For a people who view their daily life as sacred, everything used in their day-to-day activity deserves to express its maker’s highest aspirations. 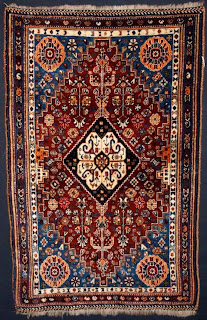 The Qashqai carpet continues to hold a special place in the world of oriental rugs, as it expresses a superlative level of both craftsmanship and creative inspiration. And it is no wonder, when two elements remain central in Qashqai culture – “il rah,” the tribal road, and their joyous weaving. As the Qashqai say – “Where I am is my carpet. Where my carpet and I am is my home.”