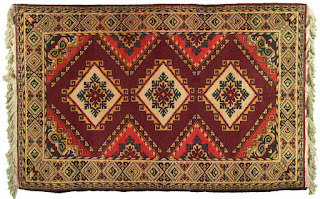 Caucasian rugs come in a wide variety of colors and geometric designs, with blue and red for backgrounds. A rug may be called a Shirvan, but the name only refers to the pattern. Ancient Caucasian populations probably learned the technique of knotting from the Seljuk invaders in the 11th century, but nothing survives from that time - not even any pictures - and the oldest known examples of carpets date from the 16th and 17th centuries, by which time the Persian influences were much in evidence. 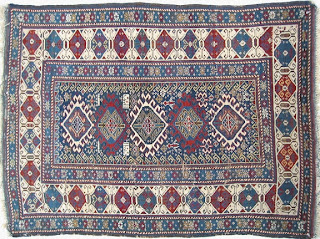 Russian rule in the early 19th century meant the end of the nobility, and therefore the decline of the specialized workshops and the Persian influence. This gave an opportunity for the small village workshops to come to the fore, when there was a period of discovery of traditional motifs and techniques, going back to early weaving roots, and perhaps even to the Seljuk traditions, but the court motifs were absorbed into these designs, and these are the carpets that are found today. 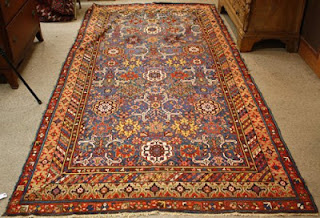 Caucasian rugs are lively, abstract and noticeable. Shirvan come in three basic designs: large medallions (with the open spaces filled with small motifs), overall patterns of tiny, geometrical floral motifs and prayer rugs with blue and ivory ground. Baku carpets have large motifs and muted colors, such as ivory, blue and light blue. They are woven in small, neat, individual geometric motifs, and in the floral and boteh forms. Striped medallions, which originally come from Iran, are more in evidence than in rugs that are woven in other areas. Hila (Chila) carpets have a medallion layout with corner motifs, and the field is closely covered with botehs. Kuba carpets are very similar to Bakus, but the pile is longer and the colors much brighter. In the mountanous are of Daghestan, coarse carpets with a high pile are woven. 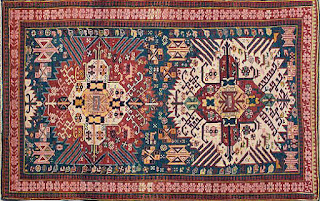