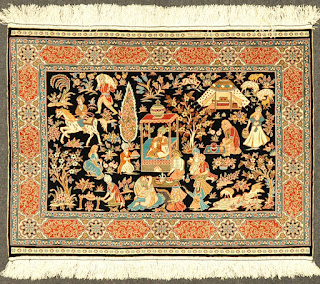 Old Turkish carpets were woven in reds and dark and light blues, with rows of repeated lozenges, eight pointed stars, and hooked octagons. Many were woven in Ushak, which until the 16th and 17th centuries was the principal center for the Ottoman aristocracy. 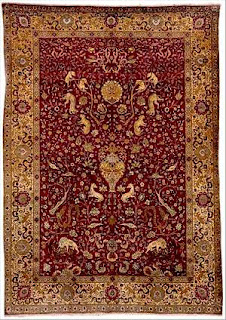 Carpet production is a relatively recent occurence in the Hereke area in western Turkey, where carpet weaving was first introduced during the mid-19th and the beginning of the 20th centuries. It is now the source of some of Turkey's most sophisticated carpets, which are distinguished by their elegance and the use of the Senneh knot, and sometimes with gold threads in the weaving of silk carpets. The style was inspired by Persian and French designs, and many follow the designs, and many follow the designs coming out of Kerman and Tabriz, while others were influenced by the Savonnerie and Aubusson carpets. Traditional Persian designs include motifs such as cloudbands, palmettes, and other floral elements in a purely curvilinear style, often with a central medallion and wide borders. 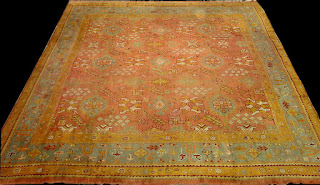 The villages between the towns of Kayseri and Sivas in eastern Turkey produce short pile rugs in a very broad range of designs, from sophisticated, curvilinear patterns influenced by those of Tabriz and Isfahan in Persia and adapted by the local Armenian weavers, to much more geometric styles and prayer rugs. All these patterns are worked in the red, blue, or ivory grounds that are favored in the West. What the weavers produce is controlled nowadays by a central buying policy, so that, no matter whether the rugs are in silk or wool, they are among the finest woven today.